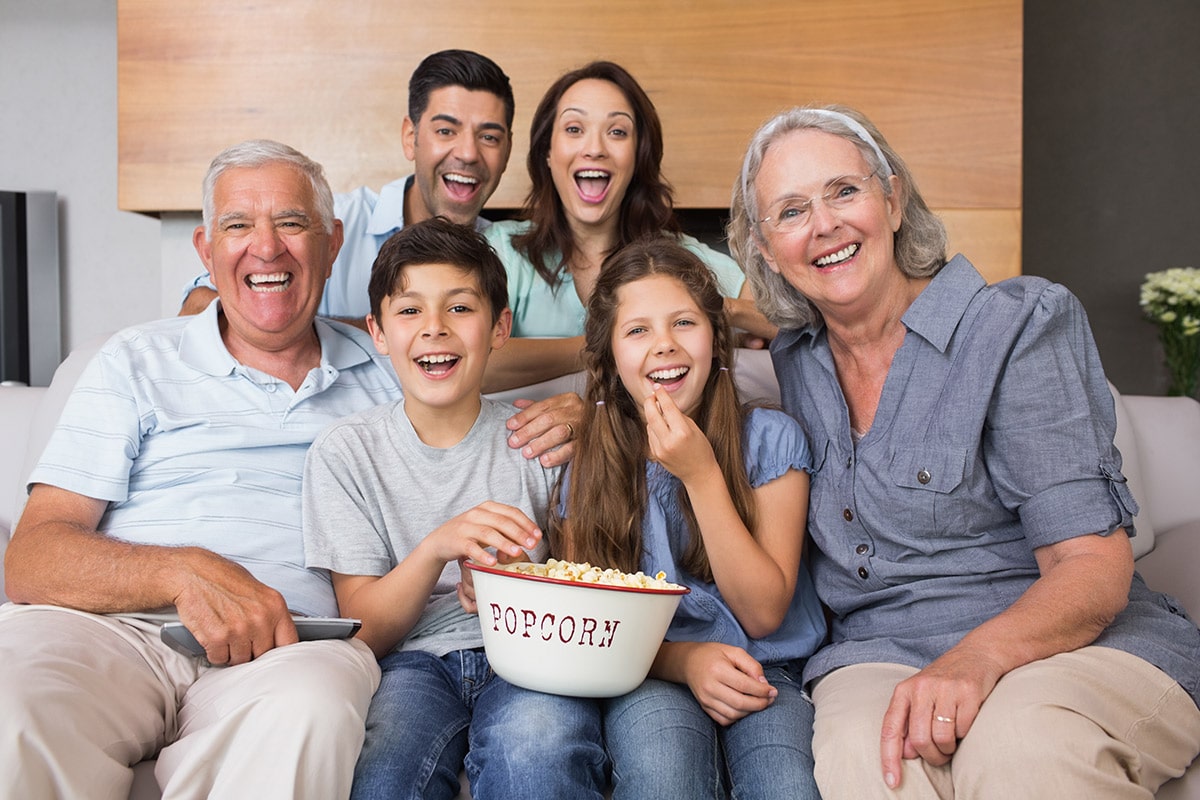 family movie night, family movies, kid spanish, learn spanish, spanish films, watch movies Blog, Spanish for families CeeJay 0 Comments
Films can be a powerful educational tool for children because they are entertaining but can also help teach empathy and values at the same time.  In this article, you will find a list of family movies that both children and grown-ups can watch together so that a fun family movie night can also be a opportunity to learn. We’ve translated the movie titles into Spanish to make it easier for you to find the Spanish version.

This heart-warming movie is based on the true story of the Trapp Family Singers. Maria is a young nun in an Austrian convent who is sent to work at Captain Von Trapp’s mansion to take care of his seven children. Soon after arriving, Maria realizes that the home is lacking cheer and happiness and motivates the children to start dreaming, enjoying themselves and just being kids. Although they have a rough start, through music she engages with them, encourages them to be creative and she starts to win them over. The only problem is that while she does this, her own heart is stolen by the captain.

Based on the novel by Frances Hodgson Burnett, the Secret Garden is about a young British girl born and raised in India who loses her parents in an earthquake. She is brought back to England to live with her uncle. Her uncle is aloof after being devastated from the loss of his wife ten years earlier. Neglected, she begins to explore the estate and discovers a garden that has been locked. She discovers that the manor holds many secrets.

Winifred, Sarah and Mary are three witches that are brought back to life on Halloween night, after being dead for three centuries. Once they realize what they have done, Max, his friend and love interest, Allison, and his younger sister Dani, go through a night of magic and horror while trying to put them back into the grave before they take all children’s lives in their attempt to stay young and immortal forever.

Eva feels completely left out when her baby brother is born. So she finds herself a new friend: a monkey called Dodger. They have fun together entertaining crowds near the beach. However, she soon realizes that Dodger is a trained thief, and that staying out of trouble when he comes back home with stolen watches and other objects, is definitely not going to be easy.

Sara is a rich girl who moves from India to a boarding school in New York when her father enlists to fight in World War I. She soon clashes with the severe headmistress, Miss Minchin, who attempts to stifle Sara’s creativity and her idealistic view of life. Sara’s belief that “every girl’s a princess” is tested to the limit, however, when word comes that her father was killed in action, all of her privileges are taken away and she is forced to become a servant in the school.

Amanda and Alyssa are two girls with totally different lives that bump into each other and realize that they are identical looking strangers. In an attempt to stop Alyssa’s father from getting married to Clarice, an unpleasant gold-digger, the girls get him to meet Amanda’s case worker and switch lives to stop the wedding once and for all. Not everything goes as planned though since Clarice decides to move up the wedding and Amanda suddenly gets adopted by an awful family that collect kids.

This is the story of a girl, Matilda, who grows up in a mean family with no values at all and that criticize her curiosity and passion for learning. Once she finally convinces them to send her to school, she meets the most awful principal in the world, and the sweetest teacher, as well, who witnesses how the little girl starts developing telekinetic powers. Matilda starts to learn to control her telekinetic powers and is soon using them on her principal so she can drive her out of the school and allow the kids to have a happy education.

A child who lives in a very poor family wins a ticket to visit the most famous chocolate factory in the world. Charlie is chosen to go, and elects to take his grandfather with him, and together they start a magnificent adventure. Once in Willy Wonka’s factory, they meet the four children that also won tickets, who are all flawed in their own ways, and the candy maker, an eccentric and lonely man. Surrounded by chocolate waterfalls and rooms full of candy, soon Charlie realizes that there are more important things in life than being rich.

A rat named Remy dreams of becoming a great French chef and decides to pursue his dream, even though his family disapproves, as being a rat doesn’t make him the most appealing candidate to work in a kitchen.  When he moves to the sewers of Paris, he finds himself living beneath a restaurant owned by his culinary hero, Auguste Gusteau. Soon his passion for cooking sets into motion a hilarious and exciting rat race that turns the culinary world of Paris upside down.

Jesse is a child who gets constantly teased at school and has no friends, until he meets his new neighbor and classmate, Leslie, a young girl with a captivating personality who encourages him to enjoy life and dream. Soon they become best friends and build Terabithia, a land of monsters, trolls, ogres, and giants and rule as king and queen.

Young Phoebe has Tourette’s syndrome and she’s not very good at following rules. Her mother and father struggle to help and understand her even while Phoebe’s little sister feels neglected by her parents. Things take a turn when Phoebe lands a role in her school’s theatrical version of “Alice in Wonderland.” Unconventional drama teacher, Miss Dodger, helps the girl feel more normal but Phoebe still struggles offstage.

This is an American 3D action-fantasy film based on the British book series of the same name by Cressida Cowell. The story takes place in a mythical Viking world where a young Viking teenager named Hiccup aspires to follow his tribe’s tradition of becoming a dragon slayer. After finally capturing his first dragon, and with his chance at last of gaining the tribe’s acceptance, he finds that he no longer wants to kill it and instead befriends it.

Fearless optimist Anna goes on an epic journey to find her sister Elsa whose icy powers have trapped the kingdom of Arendelle in eternal winter. Encountering Everest-like conditions, mystical trolls and a funny snowman named Olaf, Anna and Kristoff battle the elements in a race to save the kingdom.

This exceptional movie tells the story of Riley, a young girl who is struggling with her new life in San Francisco. She is guided by her emotions: Joy, Fear, Anger, Disgust and Sadness, as she tries to adapt. The emotions live in headquarters inside of Riley’s mind and help advise her through everyday life. Even though Joy is Riley´s most important emotion, the emotions conflict sometimes.

Sophie is a 10-year-old girl who starts an incredible adventure when she meets the 24-ft Big Friendly Giant, who initially scares her, but ends up being a gentle and charming friend. As their friendship grows, Sophie starts getting more and more involved in his world, and at the same time, attracting attention from other giants who aren’t as nice as her friend. Threatened by Bloodbottler, Fleshlumpeater, and other giants, Sophie and BFG need to convince Queen Victoria to help them get rid of these unfriendly giants.
Can you think of any other family movies that grown-ups and children alike would enjoy watching together? We always appreciate new suggestions! Feel free to leave a comment and encourage other parents to learn Spanish with their kids through movies and other fun activities.