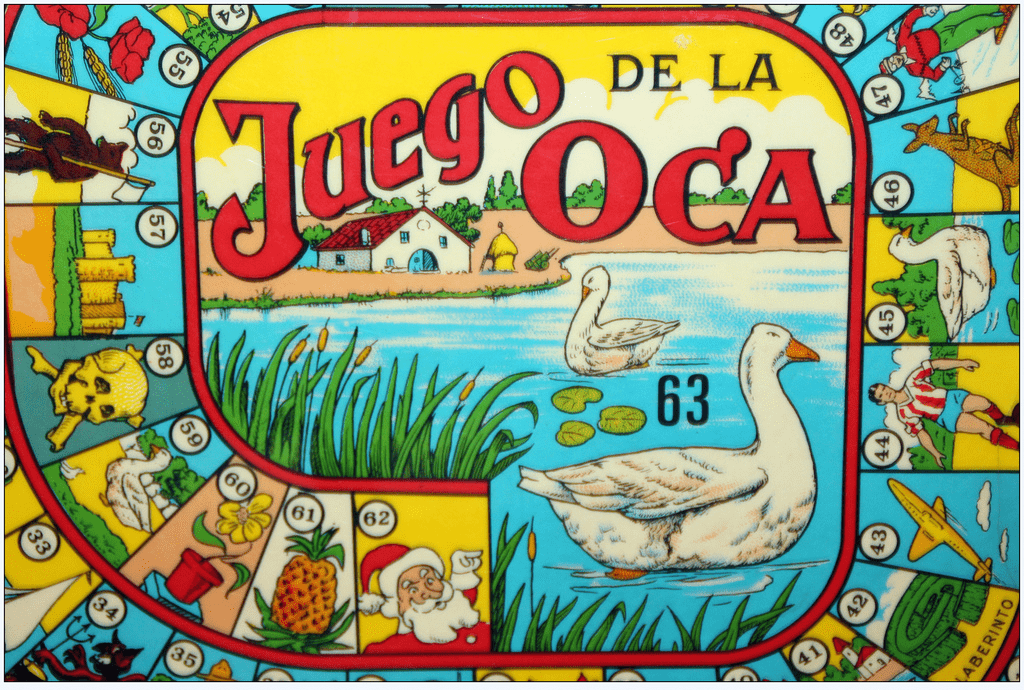 Play is one of the most natural and great ways for kids to learn, as they acquire skills in a natural and fun context. In this post we will review some typical Spanish games for children so that you can teach them to your kids or even play them with your peques!

This is a very traditional game and it is believed that the first version of this game was a gift from Francesco I de Medici to Felipe II. It is a board game (see photo above of the board) with several numbered squares that form a spiral. Each player has to throw the dice and move according to the results. For exmaple, if you land on a square with an *oca* ( this is goose in Spanish) you say ‘de oca en oca y tiro porque me toca.’ This means that you get to jump to the next square that has a picture of a goose and throw the dice again. There are several obstacles and shortcuts throughout the game, but the first one who gets to the end, wins! It’s easy and fun for kids of all ages.

It is also called “juego del Tejo” and in English is known as hopscotch. In this traditional game, children draw a pattern on the ground, traditionally with eight sections, and they have to number them. Each player has to throw a stone to the first square, number one, and then hop without touching the lines, pick it up and come back. If he does it properly, then in the next round he has to aim for number two and so on.

Very popular in different parts of the world, in order to play this game there must be at least 4 children. One of them gets blindfolded and stands in the middle, while the other children are holding hands, and has to turn around 3 times. Afterwards, he needs to catch one of the children, who can move but there are not allowed to let go of each other’s hands.

Jumping rope is perfect for children – they get to have fun and do exercise at the same time! The game can be played either individually or with friends, which is a huge bonus if you have an only child! If the child is playing by themselves, then he has to turn the rope himself, but if he is playing with other children then they can do it while someone jumps in the middle.

So… are you ready to teach your children these games? Let us know how it goes! And if you know any other Spanish traditional games, make sure you share them with us. Follow us on Facebook and leave a comment or suggestion.